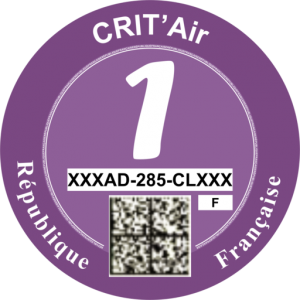 The Crit’Air is an Air Quality Certificate in the form of a sticker that is a mandatory requirement for all vehicles (including non-French registered cars and motorcycles) to drive in certain areas of cities across France. It certifies the vehicle’s environmental class based on pollutant emissions and was originally introduced in Paris in January 2017 with Lyon and Grenoble following.

It is now being introduced to several more cities and departments and in total there are 28 permanent zones (ZCR) and weather-dependent zones (ZPA) now established across France including areas of Marseille, Bordeaux, Lille, Toulouse, Strasbourg, Poitiers, Montpellier, Valence and now Chambery and Annecy.

From 1st December 2017 it was introduced to Annecy on an “educational” basis to allow motorists to time to get their certificate. From “The Spring” (no specific date of enforcement we can find) the roads located in the 30 zone will become a restricted traffic zone in the event of a peak pollution alert. Only the least polluting vehicles, with a Crit’Air 0, 1, 2 or 3 sticker will be allowed to drive there. 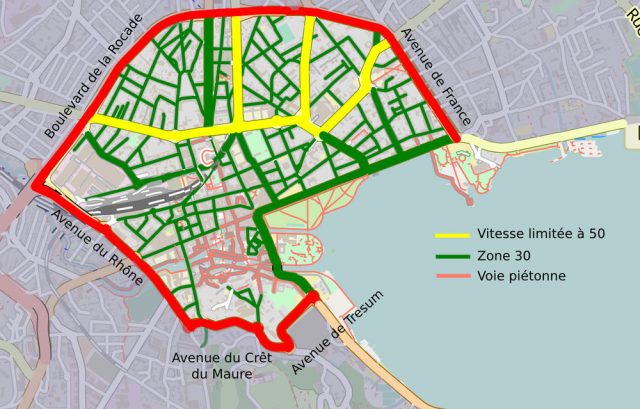 This will be quite relevant to 3 Valleys traffic as it is usually quicker to drive through the centre of Annecy than use the ring road and hire cars from Geneva airport (or if you’re driving your own vehicle via the Autoroute Blanche for example) are unlikely to have a sticker fitted and there’s the Swiss Vignette to worry about too.

In these cases you’ll need to check if a pollution alert is active before entering that city centre area without a sticker.

A Private Transfer will have all this sorted of course and it’s one less thing to worry about!

You can order a sticker on-line from the French Government website www.certificat-air.gouv.fr at a cost of €4.18 including postage to the UK – the price goes down to €3.62 from 1st March 2018 weirdly.

There are two different types of environmental zones in order to reduce the pollutants caused by the road traffic. In these zones traffic can be permanently or temporarily restricted.

The ZCR environmental zones
The “traffic restriction zones” are permanent environmental zones that are always valid. They are most often introduced in city centres to exclude old and polluting vehicles from traffic. In French, these zones are called “zones à circulation restreinte” and abbreviated ZCR.

The ZPA air protection zones
The ZPA zones “zones de protection de l’air” are not permanent – they are activated in case of high air pollution and bad weather only. They can cover the territories of whole metropolitan areas or refer to a specific geographical zone.

Savoie Department Approves Crit ‘Air
On 2nd November 2017 an order was signed by the Prefect of the Department of Savoie introducing the Crit’Air Vignette within the department. The order contains a set of measures that can be applied in case of an air pollution peak to certain vehicle types and EURO classes. However, in case of an air pollution peak, the city or municipality within the department, in which the weather-dependent zone comes into force, has to be defined first.

Getting Caught…
We’ve no information on any UK prosecutions yet, on the spot fines or chasing up photo evidence back to the UK. The DVLA do release address details to the French authorities now but as far as we know they don’t chase speeding fines after a couple of threatening letters so it’s unlikely they would for this. Usually car hire companies pay your fine then charge your credit card plus an admin fee but some just give up your name & address to the authorities (but not your passport details, so again ignoring the letters may be ok).
Of course we would never condone this and see below…

Fines
€68 for passenger cars and all other vehicles.
€135 for trucks and buses.
If a fine is not paid within 45 days it rises to €180 and €375.
Foreign Driver: A fine of €70 or more will be imposed in accordance with EU directive 2011/82 “in order to facilitate the cross-boarder exchange of information about traffic offences”. An enforcement procedure in the home country will take place on default of payment which will be pursued until imprisonment.

Anyone been sent to prison yet for not having a sticker? Let us know!

More on our Speed Camera page.