All the latest news from around the Three Valleys from the La Tania locals. A real blog since 2006, not just endless re-posts for search engine optimisaton! Photos, gossip, snow reports, what's on and all the latest on the Apres Ski scene... Now fully optimised for iPhone, Touch and Android Mobiles - just go to latania.co.uk/blog and view on your phone. Our other past blogs & favourites here 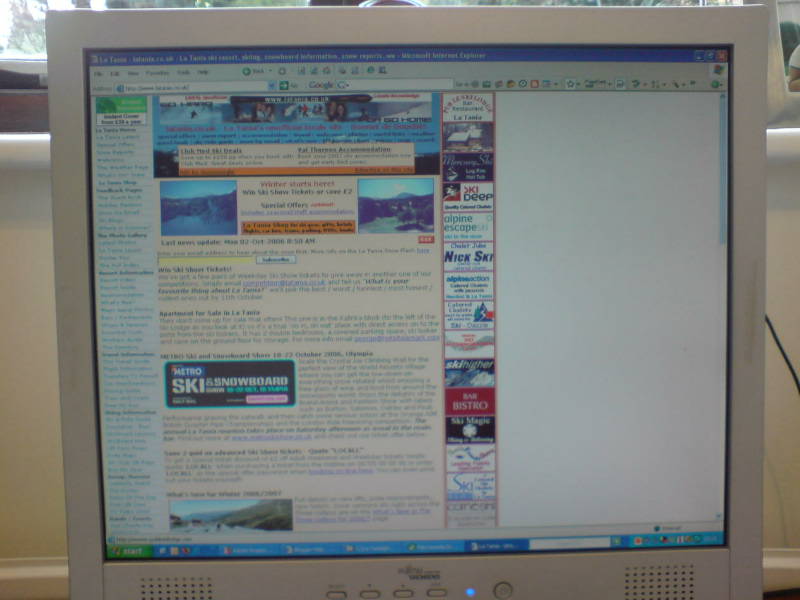 The first attempt at mobile picture blogging from my new k800i. Can’t believe it’s so simple and works straight out of the box!
La Tania Locals Ski Blog

Apartment for sale in La Tania

Posted Sat 30 Sep 2006
They don’t come up for sale that often! This one is in the Kalinka block (to the left of the Ski Lodge as you look at it) so it’s a true ‘ski in, ski out’ place with direct access on to the piste from the ski lockers. It has 2 double bedrooms, a covered parking space, ski locker and cave on the ground floor for storage. For more info email george@hoteltelemark.com
La Tania Locals Ski Blog

No More Summer Skiing at VT

3 Weeks to the Ski Show…

and always thought of as the beginning of the season… New snow in Colarado already, just rain in La Tania though but at least the first ski mags of the season are now out and lots of new things sorted out for the beginning of the season – all detailed on the La Tania Ski Resort website. Haven’t got my press pass for the show yet (nor the free tickets for the competition) – all happening a bit too quick, it’ll be opening night in the Ski Lodge before long…